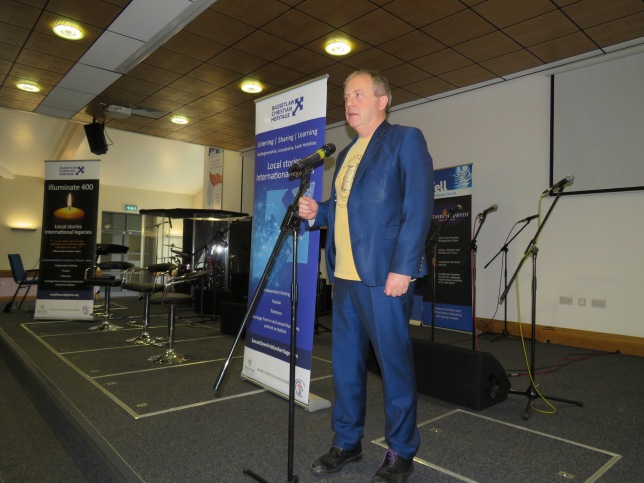 There is enthusiasm in the USA for the 400th anniversary of the Mayflower Pilgrims’ arrival in North America in 1620, however there is concern about its impact on the First Nations people who were already there.

By focusing on the theme of religious freedom and tolerance and looking forward through heritage rather than backwards as history, this will provide an approach, based on shared values, which should be acceptable to everyone. The fact that Retford has established an annual event focused on this subject, based on the thinking of its local puritans, some of whom were Mayflower Pilgrims, is of major interest to partners in the USA.

At this year’s Religious Tolerance Forum, held on Saturday 10th March 2018 at the The Well in Retford, Bassetlaw MP John Mann, who had just returned from a visit to Boston (USA), was able to share this exciting information arising from his trip. John Mann MP is Chair of the All-Party Parliamentary Group for the Mayflower Pilgrims.

Also at the Religious Tolerance Forum, Adrian Gray, local historian and author of the book From Here We Changed The World, told the story of the roots of religious tolerance in Bassetlaw and Gainsborough. The Forum in Retford is an annual event, started in 2015 to commemorate the death of local puritan, Thomas Helwys, who was the author of the first document advocating religious freedom, not only between Christian denominations but also with Jews, Muslims and those without any faith. He also claimed that there should be no connection between state and religion, meaning each individual should be free to believe what they want.

Dr David Appleby, Lecturer in Early Modern British History at the University of Nottingham, focused on the subject of tolerance in the aftermath of the English Civil War, which proportionally had a greater casualty impact on the population than the First World War. He examined how the political environment was shaped and modified by the views and opinions of the people and how the leaders of the day responded, with the resulting persecutions and unlikely collaborations.

Phil Lyons MBE gave an extensive view of the National Holocaust Centre with its elements of the exhibition, The Journey, telling a refugee story from the perspective of a young boy, collections including 700 historical items, and The Forever Project which provides interactive survivor interviewing. Virtual reality applications are also being created enabling immersive experiences to be taken out to schools. This is currently the only museum of its type in the UK.

Rev Richard Warren interviewed representatives of Release International and Open Doors who seek to provide evidence of, and argue against, persecutions happening today around the world.

The event was completed by a video of an interview between Rick Brand, Chair of Bassetlaw Christian Heritage and Dr Rowan Williams, Master of Magdalene College, Cambridge and former Archbishop of Canterbury.

What’s the background to this event?

The main Separatists and Mayflower Pilgrims came from the area around Retford, in Bassetlaw, North Nottinghamshire; Bradford from Austerfield, and Brewster from Scrooby. Although not travelling to North America on the Mayflower, Clifton, from Babworth, Turvin from Retford, Bernard from Worksop, Smith and Robinson from Sturton le Steeple along with Helwys from Broxtowe were all part of the local puritan movement.

Roger Williams (from Essex) married Mary Bernard, daughter of Richard Bernard of Worksop Priory, and together they travelled to North America, where they befriended the local tribes and learned their languages, ultimately setting up Rhode Island State as a beacon of religious tolerance, separation of state and religion, and rejection of slavery.