All Saints’ Parish Church in Babworth, the Pilgrims’ Church known as “the Church in the Woodland”, recently provided the ideal setting for a delightful display of snowdrops.

Churchwarden, Peter Swinscoe stated “we must have had over 1,000 people across the weekend – there has been a steady stream of visitors – it has been a very enjoyable time for everyone”. 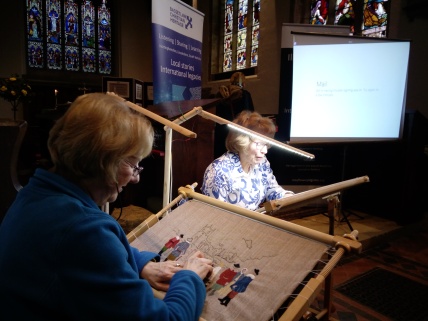 They came to Babworth to walk the Snowdrops Trail and call in to the church to enjoy the homemade refreshments and gifts on sale, see the embroiderers working and listen to the talk .

Throughout the weekend, a group of embroiderers led by Jenny King worked on their representations of five of the Pilgrims Churches (Austerfield, Scrooby, Babworth, Sturton-le-Steeple and St Swithun’s Retford). These artworks, when completed will hang in each of the churches for public view and will be available to come together as a feature for exhibitions etc. Bassetlaw Christian Heritage is currently raising funds for this work (contact us).

The papers of Revd Edmund Jessup who played a major role in establishing the Pilgrims’ story at Babworth, during his time as Vicar of Babworth (1950-85), were on display, as was the ‘Separatists and Mayflower Pilgrims’ exhibition, which included a description of the role of Rev Richard Clifton, who was a prominent Separatist and Rector of Babworth from 1586 to 1605.

There were many other wonders to see in the church, including stained glass windows by Kempe, Eginton, and Wailes. Furniture by “Mousey” Thompson also provided an exceptional attraction, with many visitors of all ages enjoying the challenge of ‘finding the mice’.

Bassetlaw Christian Heritage is involved in a series of events this coming May to commemorate 400 years since the death of Richard Clifton – leading Separatist and preacher who inspired the Mayflower Pilgrims.

Events are taking place in Austerfield, Gainsborough, Babworth and Retford.

BCH are pleased to be taking part in the Doncaster Heritage Festival, the West Lindsey Churches Festival and the Retford Arts Festival to stage an exhibition on Clifton and the Pilgrims and offer talks on the history by Adrian Gray.

May 20th 2016, marks the 400th anniversary of the death of Richard Clifton, who died in Holland before the Pilgrims left for America via Southampton, Dartmouth and Plymouth.

What’s on and when?

The Clifton commemorations begin at historic St Helena’s Church at Austerfield, now over one thousand years old. The structure of the building alone is worth a visit, but when you consider the people who have lived and worked here, and the events they have shaped, influencing the lives of millions across the world – you will wonder why you haven’t visited before.

St Helena’s Church was built in 1080 by John de Builli, using stone from the Roche Abbey quarries. Over the centuries the church has seen new sections built and renovations completed to make it the church you see today.

The tympanum over the south doorway depicts a serpent-like dragon. An article published in 1954 suggests it is 8th century and relates its symbolic meaning to the calculation of the incidence of Easter Day.

In 702AD Austerfield was the location of a Synod, where a dispute between the King of Northumbria and Wilfrid, Bishop of Ripon was resolved. The Synod also discussed and agreed was the way that Easter is calculated.

The church has several windows by one of England’s greatest stained glass artists, Charles Earner Kempe.

In the nave is a Sheila-na-gig of which there are only 16 recorded in England! This is a quasi-erotic stone carving of a female figure sometimes found in Norman churches. This carving had been blocked into a wall in the 14th century, and was only rediscovered in 1898 during restoration work.

In 1897 the north aisle was built in memory of William Bradford.

Austerfield is perhaps best known by its connections with the Mayflower Pilgrims. William Bradford was born in Austerfield and was brought to be baptised on 19th March 1589.

In front of you, when you enter the church, is the stone baptismal font where Bradford was baptized and a beautiful stained glass window on the north side of the church commemorates the 400th anniversary of this event.

William Bradford went on to become the second Governor of Plimoth Colony in America and was the second signer of the Mayflower Compact in Provincetown Harbor.

Bradford was just 18 when he left for Holland with the Scrooby Group of Separatists in 1608, and only 30 when he arrived in America. As a young man he had often been unwell which led him to read and develop an interest in religious issues.

He became a close friend of William Brewster, who was Master of the Post at Scrooby, which is where the Scrooby Group met after Richard Clifton was forced out of Babworth.

Clifton was an important preacher and Bradford and Brewster regularly walked to Babworth to hear his sermons, even though it was illegal at the time.

[As featured on Heritage Inspired]

Known as “the Church in the Woodland”, All Saints’ Parish Church in Babworth provided the ideal setting for nature to put on a truly magnificent display of snowdrops.

Around 600 people visited the church on Saturday 13th and Sunday 14th February to walk the Snowdrop Trail and enjoy the homemade refreshments on sale in the church. The guests were also treated to a wide range of paintings by talented local artist, Gerry Fruin. Part of the successful ‘Illuminate 400 – Retford 2015’, Mayflower Pilgrims exhibition was on show, as well as original copies of the notebooks of Rev. Edmund Jessup. He was Rector of All Saints’ from 1950 to 1984, and also honorary chaplain to the forces and chaplain of Ranby Prison: he did much to revive the American connection with Babworth.  There were also many architectural wonders to see, including stained glass windows by Kempe, Eginton, and Wailes; and furniture by “Mousey” Thompson.

Originally a Norman church, All Saints’ is best known for its role in the Separatist Movement of the 17th century which resulted in the Mayflower Pilgrims’ historic journey to America. Richard Clifton, Rector of All Saints’ then, was the preacher that William Bradford, from Austerfield, and William Brewster, from Scrooby, travelled for miles along the Pilgrim Way to hear preach. Clifton was a central character in the Separatist Movement, although not travelling to America himself, he inspired Bradford and Brewster, who ultimately became the Governor and Senior Elder of Plymouth Colony respectively.

Gerry Fruin and Bassetlaw Christian Heritage will be returning to All Saints’ Babworth between 28th and 30th May as part of the church’s commemoration of the 400th anniversary of the death of Richard Clifton, and also as part of the Retford Arts Festival.